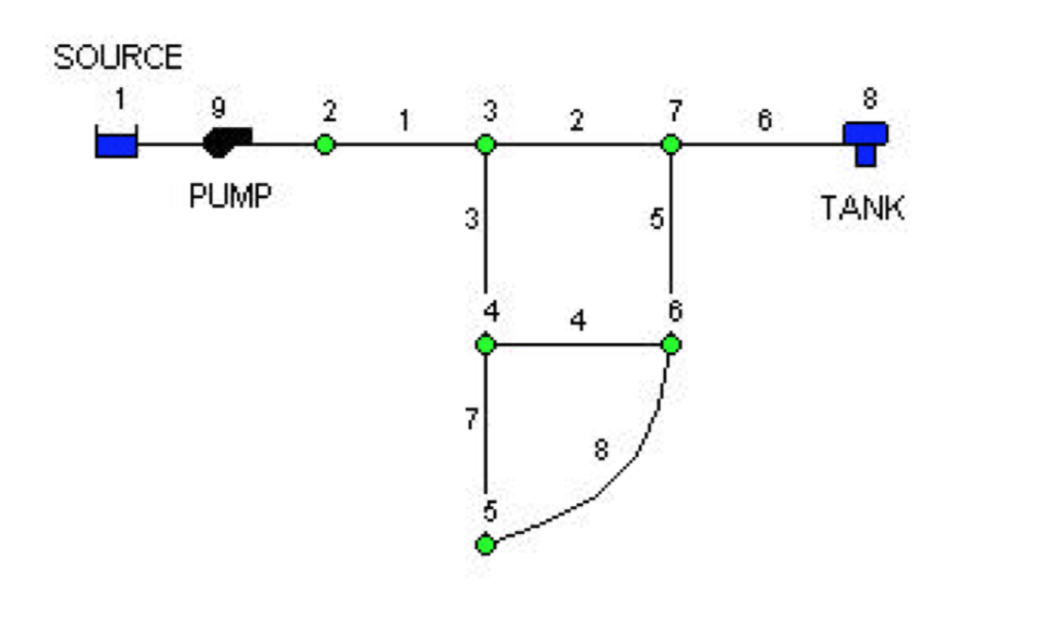 In 1994, the US Environmental Protection Agency (EPA) released EPANET, which is an open source software for modeling hydraulic and quality dynamics of a water distribution system (WDS). EPANET is a research tool that enables understanding of the dynamics within water pipelines, taking into account bulk flow and pipe wall reactions (Rossman 1994). It examines the geometric structure of the pipeline system along with a set of initial conditions (e.g. pipe roughness and diameter) and rules of how the system is operated, so that it can computes flows, pressures and water quality (e.g. disinfection concentrations and water age) throughout the network for a specific period of time.
EPANET utilizes the “gradient algorithm” for solving the hydraulic state-estimation at each time step (Todini and Pilati 1988). For water quality the Finite Volume Method was originally utilized (Rossman Lewis A., Boulos Paul F., and Altman Tom 1993), however, a Lagrangian approach (Rossman and Boulos 1996) was adopted in the following release of EPANET (EPANET v2.0). That version allowed the dynamic linking of EPANET with external software through its shared object library. In 2015, the Open Source EPANET Initiative was established (comprised of various academic, industrial and other stakeholders), to manage further development of the EPANET software. An updated software (EPANET v2.1) released in 2016, while the next major version (Rossman 2011) is currently under development. EPANET, during the last 20 years, has been established as the de facto standard tool for both industry and academia areas. Water authorities are using it to simulate possible “what-if” scenarios for the operational behavior of their systems. Industry exploits EPANET’s public-domain software license to develop new products and services for the water authorities. EPANET is considered an efficient research tool and during the last 2 decades it is used to evaluate novel algorithms in a variety of challenges associated with WDSs, using realistic benchmark data. It is extensively used as a tool to facilitate research in topics such as network design optimization ((Eusuff Muzaffar M. and Lansey Kevin E. 2003); (Savic Dragan A. and Walters Godfrey A. 1997)), operational optimization (van Zyl Jakobus E., Savic Dragan A., and Walters Godfrey A. 2004) and sensor placement (Ostfeld Avi et al. 2008). The fact that EPANET is an open source software allows researchers to expand its capabilities. At this direction, the water research community developed a number of extensions, add-ons as well as software based on the EPANET.
EPANET can be used in two ways: (a) as a standalone executable software, or (b) as a shared object library. As a standalone executable software, EPANET can be called through a standard shell (e.g. Command Line in Windows). As a shared object (e.g. Dynamic Link Library for Windows), it can be called through a programming interface by external software written in different programming languages (such as C/C++, Python, MATLAB and Visual Basic). The external software can make calls to specific EPANET functions, which modify system parameters, the time series and the simulation configuration.